If you looked only at his career as an international professional basketball player and collegiate assistant coach; or at his awards and impressive statistics, you might be tempted to think that life for Heritage alumnus Todd Abernethy ('03) is all about basketball. Nothing could be further from the truth. "Being a Christian is an everyday thing," he says. "It changes everything I do."

He says that his faith grew while he was a Heritage student. "Heritage played a huge role in my life. It helped to build the foundation for my faith," he says. "I learned that you don't have to be in Bible class to talk about how to apply it to your life." 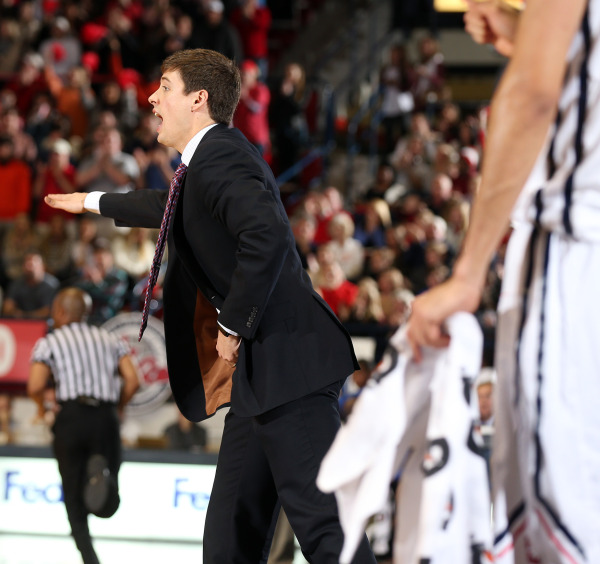 In both middle and high school, Abernethy led chapel worship as a member of the Worship Band. Al Leinbach, then principal, remembers, "Todd's influence on the student body was huge and in the right and godly direction. He has a real passion for anything he gets involved in."

Abernethy played all four years on the Heritage varsity team and became the school's all-time leading scorer, averaging 28 points per game during his senior year. His scoring averages during his junior and senior years were among the top five in the state. He was named City Co-Player of the Year and was selected for the Indianapolis Star Super Team in 2002-2003.

In the off-seasons, Abernethy played tennis for then-Heritage tennis coach, Ron Young. "Todd's presence at practice and matches greatly contributed to one of the most successful seasons for the boys' tennis team," recalls Young. "I measured this success not by wins, but by the players' maturity as individuals, athletes and Christians. Todd made a difference in the lives that he touched."

An unfortunate and serious shoulder injury kept Abernethy off the basketball court during part of his senior year at Heritage. It was a tough time. But, he says, "God is sovereign. Being a Christian helps you put everything in perspective. God's still good even if things don't go your way."

He signed on with the University of Mississippi and started every game during his freshman season. He finished his Ole Miss basketball career with over 1,000 points. Abernethy married Micah, a fellow Ole Miss athlete, in 2007.

He immediately began a six-year international professional career that included stops in the Netherlands, Estonia, Latvia, Poland and the Ukraine. "Micah and I realized just how big the world is," he says. "It was during this time that we developed a real heart and love for Eastern Europe."

Upon returning to the U.S., Abernethy became Director of Basketball Operations at IUPUI in 2013. He and his young family (Micah and their daughters Ruthie and Maria) returned to Ole Miss in 2014, when Abernethy accepted his current role as Assistant Coach for his alma mater. Looking at all of his life experiences, Abernethy says he's grateful for each one. "I've definitely experienced God's favor and His hand," he concludes.