Heritage Spanish teacher Elena Landa opens each and every one of her class periods by reading to her students in her native tongue from the ancient book of Psalms. Doing so is, for her, both an act of personal worship and a tool to cultivate a classroom environment that’s as conducive to spiritual learning as it is to foreign language.

Since the time Landa was a teenager in her Peruvian homeland, King David’s Hebrew writings have been a source of spiritual strength and a powerful link to her family’s Jewish heritage. The biblical poems, which once formed her prayers as an adolescent, today express the joy she finds in her salvation and vibrant relationship with Yeshua, the Messiah. She says that reading from the Psalms reminds her that everything comes from the Lord. “He’s in control of everything, and it’s all for my growth,” Landa explains.

For this experienced educator with 17 years in private and public school classrooms, much of her current personal and spiritual growth is happening in the context of her first year of teaching Spanish to Heritage intermediate and middle school students. “I’m so thankful,” Landa says. “Every day, I see how blessed I am here. I’m right where I should be at the moment. I’m so glad that I’m here, positioned for the next leg of my life. I’m humbled by that every day.” 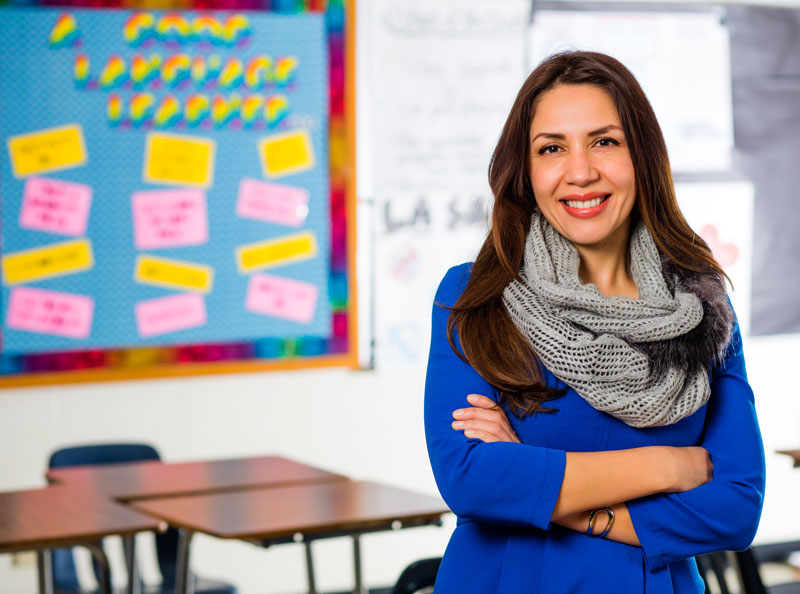 Her students are also growing from the immersion-focused approach she uses in her classroom. The research-based methodology is grounded in solid evidence that young students benefit from learning a second language in much the same way that they learned their first; by hearing it spoken frequently and in a cultural context. Studies show that the cognitive and problem-solving skills students gain from immersion and bilingual studies can even enhance their abilities across other subject areas. After just a semester of this immersion-based approach, Landa’s students are reaping the benefits. Among the biggest dividends, she says, are the frequent smiles she witnesses on the faces of even fifth- and sixth-graders who are gaining the confidence to carry on basic conversations in Spanish.

For Landa, building her students’ sense of accomplishment is a foundational component to learning. Making mistakes, she says, is a necessary part of the process. She believes that the key is to create an environment where it’s safe to stumble over vocabulary and pronunciation in the quest to become conversational. Initially, Landa says students’ biggest hurdles are fear of failure, lack of confidence and self-consciousness. She encourages them to speak without self-correcting as they go. She withholds any of her own gentle correction until after they’ve spoken, then offers suggestions for how they might say it the next time around. With this approach, she says, students practice extending grace to themselves and to one another in the process of learning. In time, they learn that it’s fun to try and it’s okay to make mistakes. “Creativity is so much better when they feel free,” Landa says. “Language is organic, not rigid. I teach students that you can make it whatever you want it to be.”

When you’re playing with a language, you don’t realize you’re learning.

Landa’s convictions about overcoming fear while learning to speak a foreign language spring from her own experience as a multi-linguistic individual, herself. Her global life experiences have made her conversant in no fewer than seven languages – Spanish, German, Italian, Danish, Hebrew, French and English – and fluent in four of them. After completing university in Peru, Landa pursued additional language studies in Denmark before coming to the United States. She attained her American citizenship in 2007, served in the role of interpreter at the East Tennessee Children’s Hospital and taught classroom Spanish in Knoxville, Tenn. before she and her family moved to Indianapolis in 2016.

“Speaking another language is a skill, just like any other, and you have to practice it enough to be able to talk with understanding,” believes Landa. So, practice they do; in daily warm-ups, grammar and mechanics lessons and oral exams. Together, students use their growing vocabulary to string together complete sentences that build verbal story lines. Landa often disguises instruction by making it fun and relevant. “When you’re playing with a language, you don’t realize you’re learning,” she says. 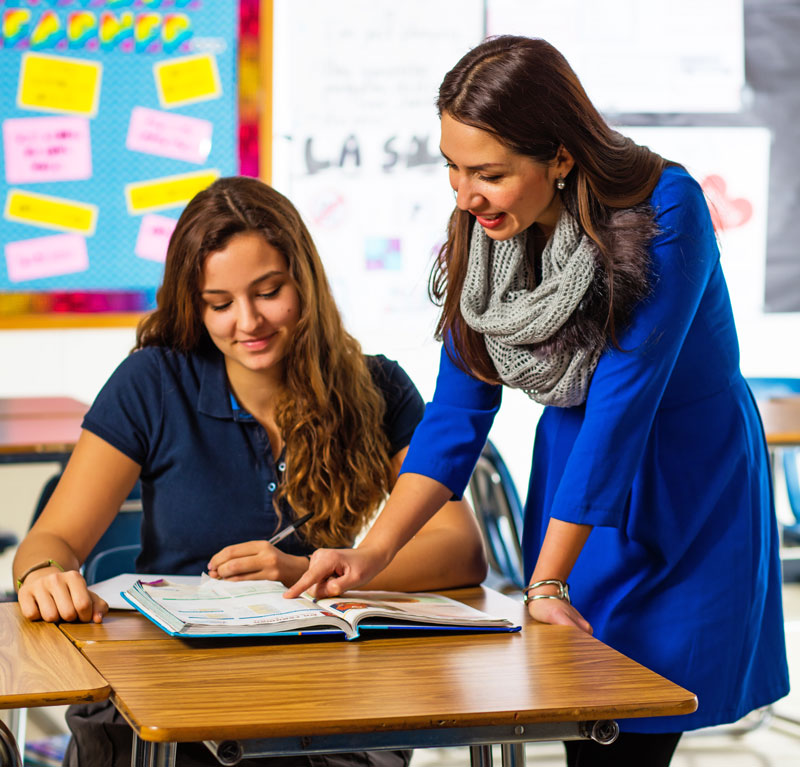 She structures a series of required student projects around themes designed to increase their oral fluency. For one class, she asked each student to use an online app and their working Spanish vocabulary to create and then present to the class their unique version of a home they would like to live in. The HGTV-like project unleashed the depth of her students’ creativity, with some exceeding the assignment’s requirements and Landa’s expectations. One student hand-crafted a convincingly precise, mini-replica of her imaginary home. Another built both a digital home model and an accompanying PowerPoint presentation to explain and “sell” its features to the class. “I live for those kinds of moments,” says Landa. “It’s why I teach.”

For each of these projects Landa assigns, she provides the parameters and grading rubric and then, she says, she empowers students to express their own unique style in how they approach it. For seventh graders, it could be through a writing project about the school of their dreams; for eighth graders, it might be in their depiction of either a life coach or a television reporter – all in Spanish, of course. Landa says she constantly asks herself the question, “What do my students need?” and then looks for new, creative ways to address their educational needs and help them to grow.

One of Landa’s favorite Old Testament accounts comes from Genesis, where Jehovah asks the patriarch, Abraham, to sacrifice his son, Isaac, at the altar. A Jewish rabbi once explained to Landa that God uniquely and providentially positioned the sacrificial ram in the thicket, to fulfill a specific role and purpose. Landa sees the same hand of sovereignty guiding her life and directing her purpose. She believes that God has uniquely prepared and positioned her for the role God has created for her at Heritage. She is well poised and excited to offer her combined love for language, students and her Savior with the Heritage community. “It humbles me to know that God knew my life before everything,” she concludes. “It helps me to know that I can trust Him in the present.”