With only 38 seconds left in the nail-biting 2016 Monon Bell Classic game, thousands of DePauw University football fans leapt to their feet in excited anticipation. They held their collective breath as Tigers’ quarterback, Matt Hunt (HCS 2013), snapped a decisive, 13-yard pass to his younger brother, Andy (HCS 2015). The final touchdown delivered DePauw fans a 37-34 victory over their Wabash College rival and ended the team’s seven-year-long stretch of Monon Bell defeats.

For the Hunt brothers, both Heritage alumni and former Eagles athletes, it was the perfect ending to Matt’s final season, as a senior for the Tigers. Matt’s 400 offensive yards during the game earned him a place in the history of the Monon Bell Classic, the oldest collegiate football rivalry west of the Alleghenies. 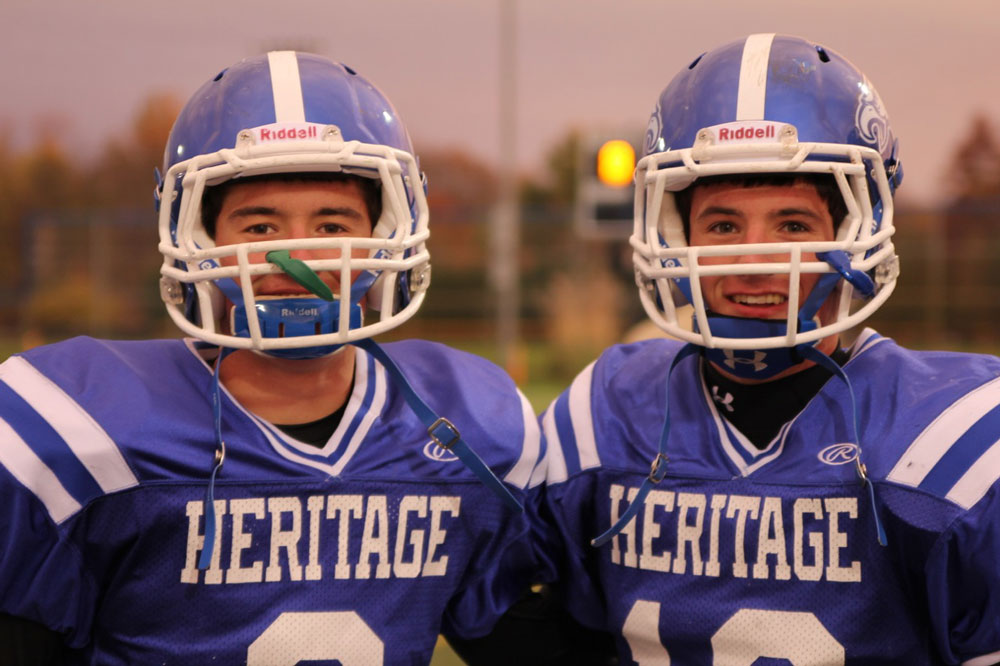 Matt and Andy Hunt at Heritage

The closely-knit Hunt family members might well have been some of the most enthusiastic fans at the Monon Bell game on that chilly November day; and at every other DePauw game over the past four years. Matt and Andy’s parents, grandparents and sister, Maggie (HCS 2017), have supported the brothers every step of the way. “They remind us about what’s most important in life”, says Andy. The boys first began playing their beloved sport when they were mere elementary students at Heritage. In 2005, their father, Kevin Hunt, helped to start Heritage’s youth football program that today is offered for third- through sixth-grade players.

Both Hunts say they benefitted from the athletic opportunities they found at Heritage. By the time they reached high school, they played both baseball and, of course, football. Some of the richest athletic experiences, they say, came from the positive relationships they established with their coaches. Long-time former Heritage football coach, Ron Qualls, and Heritage baseball coach, Dan Ambrose, both had an impact on the Hunts. Besides building their athletic ability, Matt says Qualls “was concerned about making you a better person. He genuinely cared about you.” Says Andy, “Coach Qualls and Coach Ambrose both encouraged me to be a better player and a better person. If I ever needed anything, they were there for me.”

At Heritage, I learned how to back up my faith with facts about why I believe. Our spiritual values were ingrained in us from an early age.

The Hunts’ full 13 years as Heritage students included more than athletic accomplishments. They say they appreciated the academic and spiritual opportunities they received. Both fondly recall their experiences as National Honor Society scholars, when they served as after-school academic tutors for inner-city students through a partnership that Heritage Bible teacher, Carter Booker, developed with Tabernacle Presbyterian Church. Andy says he also cherishes the time he spent during his junior and senior years at Heritage, when he became an on-campus mentor to a Heritage fourth-grade male student. He became a role model for the student and gave him extra help with his homework. These kinds of opportunities, say the Hunts, were an important part of the others-focused, spiritual emphasis they grew up with at Heritage. The experiences served as valuable preparation for the academic rigors and also the new challenges to their faith that accompanied their transition to college life. “At Heritage, I learned how to back up my faith with facts about why I believe,” explains Andy. “Our spiritual values were ingrained in us from an early age. In college, you solidify what you believe,” says Matt. 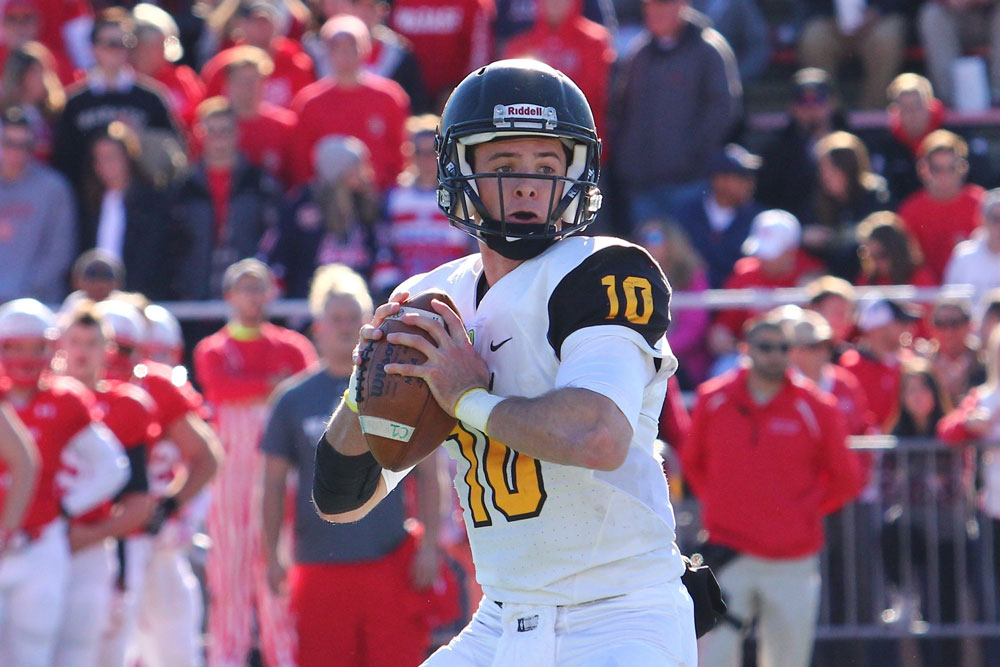 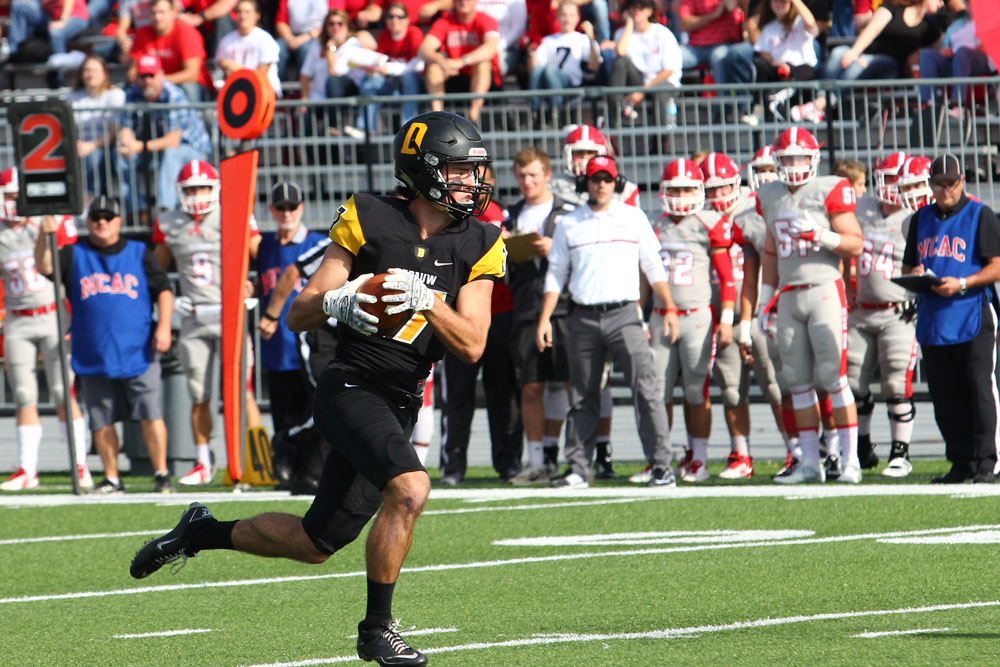 Football has been perhaps one of the most obvious common threads in the Hunt brothers’ lives so far. The Monon Bell Classic win last fall was a pinnacle of this shared experience. The victory elicited accolades for both brothers. Matt became the first player from DePauw to receive the North Coast Athletic Conference’s (NCAC) Mike Gregory Award for Offensive Player of the Year. He received unanimous selection from coaches for this honor, after having led the league in numerous categories. For the second time in his collegiate athletic career, he also was selected for the All-NCAC first team. Andy, a sophomore and wide receiver, earned All-NCAC second team honors, as well. He placed first in the conference for his 10 season touchdown receptions; third for his 67 catches and seventh with 686 yards.

The end of last year’s season was, for Matt, bittersweet. It marked the conclusion of an outstanding collegiate athletic career and his last official game on the same field with his brother. But he also had much to look forward to. This summer, he launched his professional career in business, with a post-graduation position he sacked with KITE Realty in Indianapolis. And, he says, the friendships he formed with teammates over the past four years promise to be enduring ones; much like the strong, ongoing friendships that he and Andy formed while at Heritage. “The bonds you create on a football field are long lasting,” he says. This season, he’ll join the Hunt family’s cheering section at DePauw games, rooting for Andy from the bleachers. But even if it’s from the sidelines, one thing likely won’t change; the connection the brothers have long shared, both on and off the football field. “We’ve always been very competitive, but we have a good connection,” says Andy. “We always have each other’s back.”